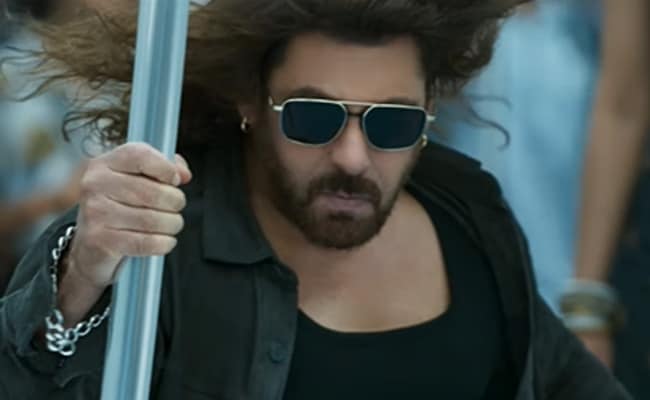 A still from the video. (courtesy: Salman Khan Films)

Finally, the wait is over as the makers of Kisi Ka Bhai Kisi Ki Jaanhave unveiled the teaser. In the teaser, Salman Khan is sporting two looks. At the beginning of the teaser, he is sporting a rugged look with long hair, while towards the end, he looks handsome in a clean-shaven look. The one-minute-long video opens with Salman aka Bhaijaan (more on it later) riding a bike in a desert. In the next frame, we see Salman breaking into a moving train and beating what appear to be bad guys. In the background, we can hear him say, “Sahi ka hoga sahi, galat ka hoga galat (Right will be right, wrong will be wrong).

In the next frame enters Pooja Hegde, looking beautiful in a traditional ensemble, while in the background, we can hear her asking Salman, “Waise apka naam kya hai? (What is your name?).” It is followed by a scene where Salman is fighting on the street with what appear to be goons and replies (to Pooja’s question), “Mera koi naam nahi hai, lekin main Bhaijaan naam sai jana jata huin. (I don’t have any name, but people know me as Bhaijaan.) Followed by a series of fights.

The teaser also introduces Venkatesh Daggubati, Shehnaaz Gill, Palak Tiwari, Raghav Juyal and Siddharth Nigam. Jagapathi Babu, who plays the role of an antagonist in the movie, enters the frame in style.

Towards the end of the teaser, Salman, donning a formal outfit, is back to his fighting look. During a fight, he mouths a powerful dialogue, “Jab shareer, dil aur dimag mujhse kehte hain bas bhai, no more, main kehta hoon bring it on (When my body, heart and mind tell me to stop, I tell them bring it on).”

Salman Khan also shared the teaser on his Instagram handle and captioned it as “Sahi ka hoga sahi, galat ka hoga galat, (Right will be right, wrong will be wrong) #KisiKaBhaiKisiKiJaanTeaser out now…”

Take a look below:

Helmed by Farhad Samji, Kisi Ka Bhai Kisi Ki Jaan will release on the occasion of Eid on April 21, 2023.