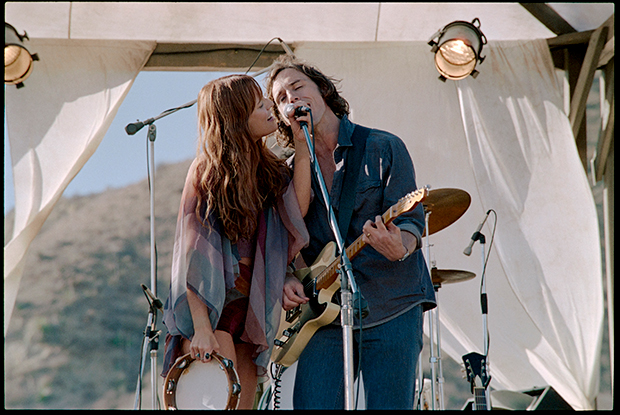 Brace yourself for some epic rock ‘n’ roll. The new teaser trailer for Daisy Jones & The Six is out, and it does not disappoint in the slightest. “Look, I know that I said I would tell you everything. But how much of everything do you really want to know?” Daisy says in the trailer.

The footage gives us the first listen of the actual band. Seriously, announce the world tour immediately. Riley Keough and Sam Claflin’s voices blend perfectly together as Daisy and Billy. There’s a snippet of “Regret Me” playing throughout.

“You write songs about who you wish you were, not who you are. What if you wrote songs about the guy who maybe wants things that he shouldn’t?” Daisy asks Billy. He replies, “Who would want to hear a song about that?” Daisy says, “I think everybody would.”

The limited series will follow the rise and fall of a rock band in the late 1970s. After a sold-out show at Chicago’s Soldier Field, the band called it quits. Now, decades later, the band members finally agree to reveal the truth. The show also stars Camila Morrone as Camila Dunne, Will Harrison as Graham Dunne, Suki Waterhouse as Karen Sirko, Josh Whitehouse as Eddie Roundtree, Sebastian Chacon as Warren Rhodes, Nabiyah Be as Simone Jackson, and Tom Wright as Teddy Price, with a special guest appearance by Timothy Olyphant as Rod Reyes.

Daisy Jones & The Six will premiere March 3 on Prime Video, with new episodes rolling out weekly on the streaming service. The series is based on Taylor’s bestselling 2019 novel of the same name.

‘Daisy Jones & The Six’ Show: Everything To Know About The Cast, Release Date, Album & More

How the NYT is building a modern tech stack...