Finland holidays: The joys of brutal but beautiful
F 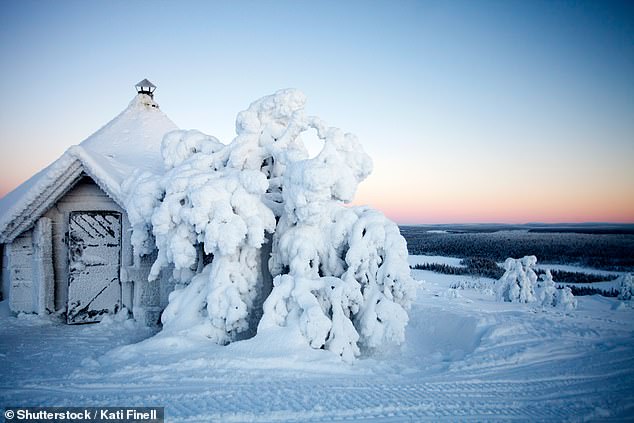 We all need to toughen up, say the Finns. Forget hygge. We should be gutsy, or sisu. It’s all about resilience and bolstering the psyche. There are even a few new books on the subject with names like Sisu: The Finnish Art Of Courage.

Eastern Lapland is a good place to try this out. Our family — my wife, Jayne, and our daughter Lucy, 17, had never been anywhere so demanding.

In winter, the temperature averages minus 13c, with occasional lows of minus 30c (minus 22f) and you only get about four hours of sun. Swamps and lakes cover 80 per cent of it and they’re frozen for months.

So, it’s a challenging world. Wolves and bears like it but there aren’t many people. In our area, Salla, there were more than 10,000 reindeer and only 3,400 humans.

John Gimlette and his family travelled to Lapland (pictured), where they found that the trees, clumped in snow, ‘look like giant sprigs of cauliflower — or trolls’ 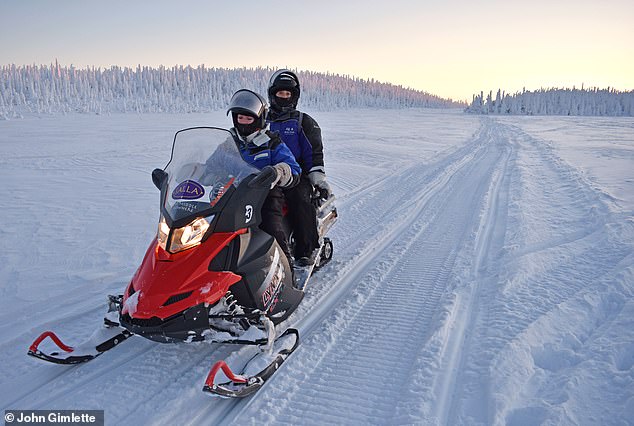 The Gimlette family (above) tested out snowmobiles in the little ski village of Sallatunturi. John says that the vehicles ‘seemed to take [them] to the end of the Earth’

But it’s also beautiful. The light is pink, and the air is dry and peppermint-clean. Lower down, the forests look lacy and delicate. Up on the fells, however, everything is thickly pebble-dashed in ice. The trees, clumped in snow, now look like giant sprigs of cauliflower — or trolls.

To the locals, like our guide, Paula, there’s magic at work. They all gather their own berries and have a mökki, or wooden cabin, in the woods. Salla’s supermarket has everything else you need in the Arctic, including toasting forks and slabs of moose.

We were soon out there, toughening up. In our little ski village, Sallatunturi, there were 15 runs and 150km of cross-country trails. Thanks to floodlights and special rented suits, we’d be out all hours. Time freezes when you’re having fun. At one point, we found ourselves tobogganing at midnight. 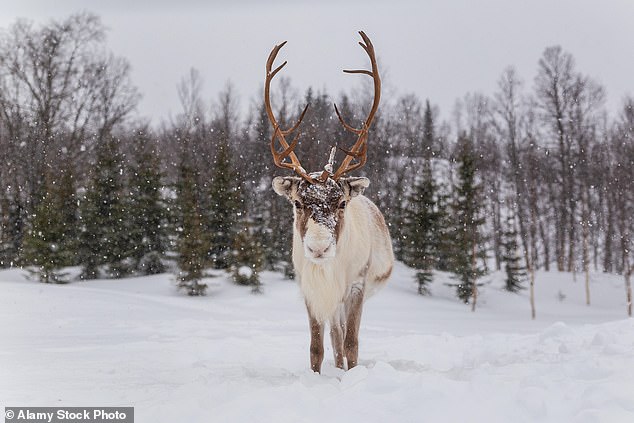 At night, it was like skiing through a sculpture park for monsters. The world’s oldest ski was found near here and is said to be 5,267 years old. Sometimes Paula joined us. Once, her daughter came too, on a trek through the fells. Although only six, she thought nothing of skiing 8km. Here, sisu applies to children too and it starts the day you can walk.

Most mornings we were out with the huskies, reindeer or snowmobiles. This being Finland we were never merely passengers but had our own sleighs and our own machine. The reindeer herder wore a suit made of pelts and gave simple instructions: ‘Driving is easy. Reindeers know where to go. They have their own brakes.’

I loved these beasts and the gentle curves they cut through the frozen forest. But Lucy preferred the huskies, with their crazy, yelping, howling speed. On our expedition there were 180 dogs, all with names like Surprise and Panic. It was like riding the hills on a torrent of fur. 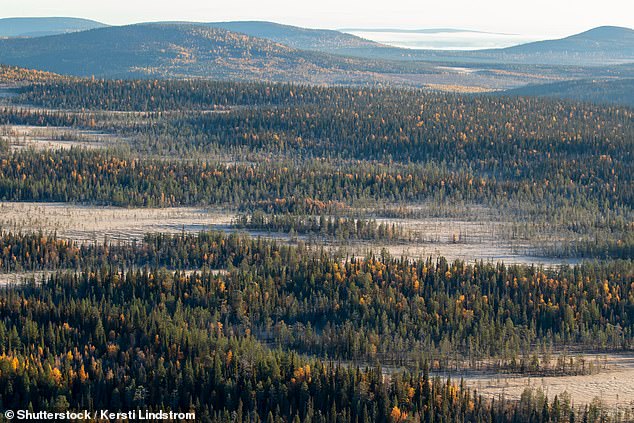 Swamps and lakes cover 80 per cent of Eastern Lapland and they’re frozen for months, John reveals. Above is the region’s Salla National Park in the autumn

The snowmobiles were harder to love but seemed to take us to the end of the Earth. At one point, we reached the watchtower on Ruuhitunturi. It looked as if it had been blasted with meringue mix.

Way below was Russia, laid out like a great frosted carpet. This was a good moment to think about sisu. It was here that the concept took root in 1939. That November the Russians invaded in the Winter War and Salla became, for a while, a battlefield. But the Soviets would soon regret their incursion. Outnumbered 15 to one, the Finns picked them off and pushed them back.

In Salla, a small museum commemorates those months. Amid the bear-traps and stuffed wolves, there are helmets and rifles. The curator told me she still finds military kit in the woods and that everyone knows about the miracle at Salla. 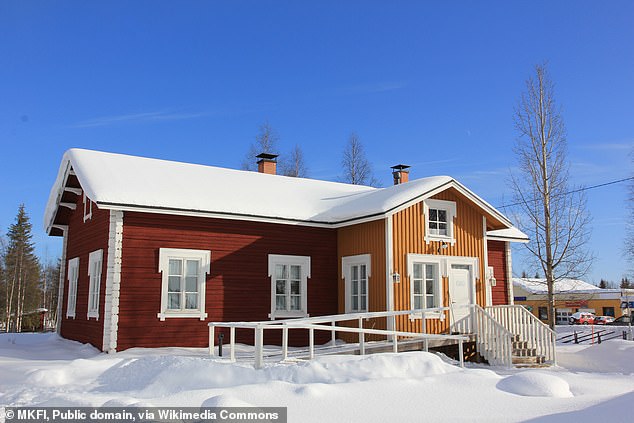 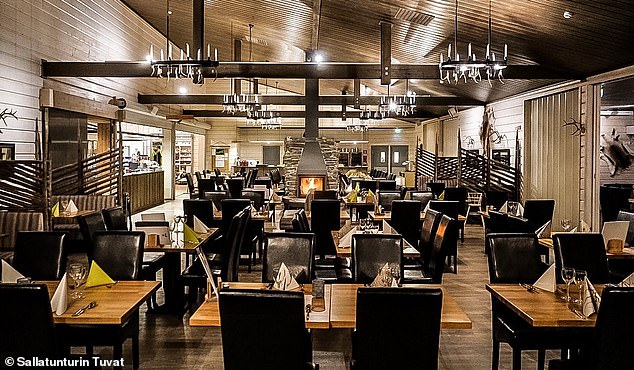 John stayed at Sallatunturin Tuvat resort and discovered that its Kiela restaurant (above) has a sumptuous menu of Arctic fare; soups, char, salads with berries and reindeer steaks

Of course you can’t be tough all the time, and that’s why we had the Sallatunturin Tuvat. Anywhere would have seemed snug after a day on the ice but our little resort had cosiness taped.

Our cabin had a sauna, log fire and drying machine. For some Finns this may have been too much and the man next door would sometimes sneak out, naked, for a roll in the snow.

The hotel’s restaurant, Kiela, was hung with skins and skis. Then at the bottom of the slopes was a great log house called Keloravintola. Both had similar, sumptuous menus of Arctic fare; soups, char, salads with berries, reindeer steaks and even a little ‘slow cooked bear’.

The nights were almost as lovely as the days. Some evenings, we’d tramp through the woods, everything around us filigreed in ice. But then, by the frozen lake, the clouds would open and we might see shooting stars or great pulsing smudges of green: the Northern Lights.

On our last day, we hired fat bikes and set off through the hills. I remember a reindeer mooching down the trail and a small ginger dog digging for partridges in the snow.

We also came across a sign, announcing The Middle of Nowhere and a group of pensioners belting along on cross-country skis. There goes sisu, I thought; pain and joy in equal measure.

Finland holidays: The joys of brutal but beautiful