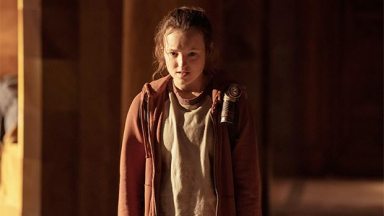 The Last of Us episode 2 begins in Jakarta, Indonesia, on September 24, 2003. Police officers come up to a woman having lunch. Her name is Ibu Ratna. She’s a professor of mycology at the University of Indonesia. They take her to a lab and ask her to examine a specimen.

More ‘The Last Of Us’ News:

“This is ophiocordyceps. Why did you use chlorazol to prepare the slide?” she asks. The officer says that is the preparation used to take a sample from a human. “Cordyceps cannot survive in humans,” she says. Until now.

Professor Ratna gets decked out in protective gear and taken to a room where a human corpse is being held. She’s asked to look at the bottom of the patient’s left leg. There’s a bite mark with a scar around it. She uses a scalpel to cut into it. “Is this bite from a human?” Professor Ratna asks. The officer nods yes.

She opens the patient’s mouth and sees the fungus living in her mouth. She quickly runs out. Professor Ratna asks when this happened. It all started 30 hours ago in a flour and grain factory in the west part of Jakarta. “A perfect substrate,” Dr. Ratna quips.

The officer says the woman who was bitten suddenly became violent and bit three co-workers. They locked her in a bathroom. The police came and shot her. Professor Ratna asks what happened to the people she bit. They were taken for observation, and then it became clear they had to be executed as well. No one knows who bit the woman. Fourteen workers are still missing.

Professor Ratna is asked to keep this from spreading. “We need a vaccine or a medicine,” the officer pleads. Professor Ratna responds, “I have spent my life studying these things. So please listen carefully. There is no medicine. There is no vaccine.” He wants to know what to do next.

‘The Last Of Us’ Mystery: Why Is Ellie Immune?

“Bomb. Start bombing. Bomb this city… and everyone in it,” Professor Ratna urges. The officer looks shocked, but Professor Ratna is gravely serious. She begins to cry and asks to be taken home.

Ellie Claims She’s The Key To A Vaccine

In the present-day timeline, Ellie wakes up to Joel and Tess watching her intently. Joel has a gun pointed at Ellie. “Do I look like I’m infected?” she says. Ellie shows Joel and Tess her arm. It hasn’t gotten any worse. Tess wonders what Marlene was doing with an infected kid. Ellie explains Marlene found her after she was infected. Marlene had her locked up and tested every day. She never got sick.

Joel isn’t convinced that Ellie isn’t going to get sick. Tess knows that if they take her back, Ellie will be killed because she’ll still test positive. Tess wants to know why Ellie is so important to Marlene. “Joel and I aren’t good people. We’re doing this for us because, apparently, you’re worth something. But we don’t know what you’re worth if we don’t know what we have,” Tess says to Ellie.

Ellie reveals that Marlene told her not to tell anyone, but now she kind of has to.  “There is a Firefly base camp somewhere out west with doctors. They’re working on a cure,” Ellie reveals. Joel has heard this all before. Ellie is the key to finding a vaccine. Joel doesn’t believe her. He pleads with Tess to reconsider this mission. Tess wants to finish it. Regardless of if it’s true, they’ll still get payment out of it. Joel reluctantly agrees.

Joel, Ellie, and Tess head out. Ellie notices a huge crater in the middle of the city. Tess explains that most of the big cities were bombed to slow the spread of the infection. Tess asks Ellie how she got bit. Ellie snuck into a mall inside the Boston QZ. She wanted to see what it was like. One of the infected came out of nowhere and bit her. Ellie claims she was alone. She’s an orphan, so no one is going to come looking for her.

The trio hears a scream in the distance, but Joel insists they just keep moving. They have to cross through a former hotel that’s been flooded with water. They make it through without encountering any of the infected. Ellie tries to make small talk with Joel while Tess goes to do some investigating. He passes on answering most of her questions. Ellie asks how long the infected live. Joel reveals that some last about a month or two, and then some are walking around for 20 years. He’s killed lots of them over the years.

Tess returns with some bad news. She shows Ellie and Joel a swarm of infected lying on the ground below. “They’re connected,” Ellie notices. Tess says, “More than you know. The fungus also grows underground. Long fibers, like wires, some of them stretching over a mile. You step on a patch of cordyceps in one place, you can wake a dozen infected somewhere else. Now they know where you are. Now they come. You’re not immune from being ripped apart, you understand?” It’s essential that Ellie understands this.

Ellie, Joel, and Tess next have to make it through the Bostonian Museum to get to the State House where a group of Fireflies are waiting for Ellie. Ellie stumbles into a newly dead body that hasn’t turned yet. Joel and Tess are clearly spooked. They have to be silent as they make their way through the museum. There are piles of corpses covered in dead fungus. Ellie accidentally makes a sound, which stirs something above.

Just after Ellie and Tess make it to another room, part of the museum roof caves in. Unfortunately, more danger awaits them. An infected person heads toward them. Joel urges Ellie and Tess to be silent so the infected won’t notice them. Another infected comes into the room. Joel’s plan doesn’t work, and he ends up fighting one of the infected.

Tess and Ellie run. Joel reloads his gun and spots Ellie. He goes to fetch her. They start to walk away, but he steps on some glass. This sparks another fight with one of the infected, and it nearly takes out Ellie. Joel is able to kill the infected person. The other comes barreling in, but Tess stops it with an ax so Joel can finish it off.

Ellie seems to have been bitten again. “I mean, if it was going to happen to one of us,” she quips. Ellie, Joel, and Tess quickly make their way to the top of the building. Ellie walks across a wood plank to another building. Joel is still doubtful about Ellie. The second bite could take. Tess urges him just to accept this. This could be good news. Maybe once they could actually win.

Joel walks up next to Ellie, who is taking in the view. “Is it everything you hoped for?” he asks. She replies, “Jury’s still out. But man, you can’t deny that view.”

They continue on their journey. They make it to the State House. Joel and Tess are immediately uncertain. There are no Fireflies around. It’s too quiet. Ellie notices a fresh blood trail. Tess grabs Ellie and takes her inside. There are dead bodies everywhere. Joel tells Ellie that one of the Fireflies got bit. The healthy ones started fighting the sick ones, and everyone lost.

All the Fireflies are dead. Ellie doesn’t know where Marlene was going to take her, just that it was out west. Joel wants to go back, but Tess is staying. “I mean, our luck had to run out sooner or later,” Tess admits. That’s when Ellie makes a startling realization. “F**k, she’s infected,” Ellie says.

Joel demands Tess show him the bite. She tries to go to him, but he flinches. Tess pulls down her shirt and reveals the bite on her chest. She asks Ellie to show her bite. Ellie’s bite mark isn’t getting worse. “This is real. Joel, She’s f**king real,” Tess says.

Tess begs Joel to take Ellie to Bill and Frank. Joel doesn’t think they’ll take her. Tess knows they will because he’ll convince them to. “This is your chance. You get her there. You keep her alive, and you set everything right. All the sh*t we did. Please say yes, Joel,” Tess says.

One of the infected comes to, but Joel shoots it right in the head. Unfortunately, this sets off a chain reaction with the fungus and other infected, just like Tess warned about. They only have about a minute. Tess takes barrels of gasoline and spills them onto the floor, along with some grenades. She tells Joel to save who he can save. He grabs Ellie and runs. “No, we’re not leaving her!” Ellie screams.

Tess is left alone waiting for the swarm of infected. They run inside. She’s trying to get her lighter to catch to set off an explosion. One of the infected notices her. He walks up to her and kisses her, allowing the fungus to get inside her mouth. Thankfully, the lighter finally catches. Tess dies in the State House explosion as Joel and Ellie escape. New episodes of The Last of Us air Sundays at 9 p.m. on HBO.

What Car Do You Want, But Would Ruin You...

The Sacramento Zoo is Celebrating the Birth